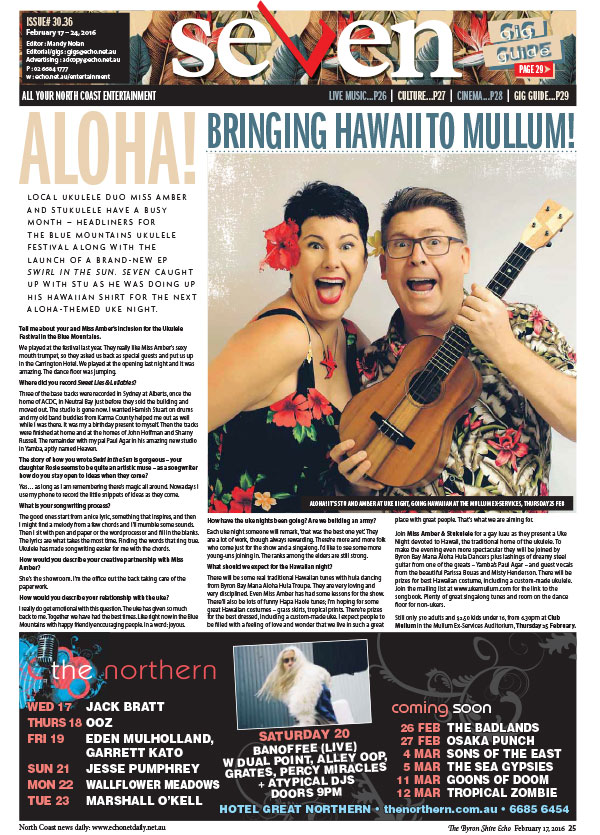 Maybe it's because Mandy Nolan and husband John Stevens have just eloped in Hawaii (setting a world wide trend followed by a Kardashion) ... how surprised and thankful were we to find our faces back on the cover of Seven, the entertainment section of the local paper –The Echo. Lets hope it brings in some nice Hawaiian outfits next Thursday 25 Feb. Thanks for the support Mandy and The Echo.

The Day a Swirl In The Sun Arrived

We have a new 5 track EP ready for DOWNLOAD NOW

This collection of tunes came about because of one song that arrived one evening about 8 years ago when our daughter Rose was 4, drawing a picture of the sun. I asked "Come on Rosie let's write a song..." She immediately responded with the first two lines: "There's a swirl in the sun.. and a swirl in the sky" I was inspired so I went for a drive around our home town of Mullumbimby in Northern NSW. Twenty minutes later I had the lyrics and melody for the song written. It was a lullaby. This is me recording the song so I wouldn't forget it as I sang it to Rosie when she went to bed.

We have released the EP online just in time for our trip to the Blue Mountains Ukulele Festival this Friday.

Bed tracks for 3 of the songs were recorded at Albert.s in Mosman Sydney (which is sadly no longer) with Karma County front man Brendan Gallagher behind the desk. Drums deftly played by Mr Hamish Stuart and double bass by old Karma County brother, Michael Galeazzi. Also featured on the EP is beloved Rod Coe on double bass, John Hoffman on flugelhorn, Sharny Russell on Keys, Parissa Bouas on backing vocals and engineer / co-producer Paul Agar from Heaven Studios on lap steel and spoons. We are thrilled with the final mixes.. hope you enjoy.

Folks... do not labour under any false  misapprehensions... being an independent record company / publicist / manager / booker / songwriter / musician / graphic artist / web master / singer / husband / father / decent human / ukulele player... is a daunting task. We are ever so stoked that we have received our first review... in Rhythms Magazine. Thanks Tony Hillier for giving us your time. We understand why a serious music reviewer may not want to give us the energy and actually listen to our efforts ... so we really appreciate you giving us your time and some space in the magazine. We pray that more reviewers will see the worth in our cause...  to bring the joy of making music back to all people. So ... amen to that. if you're not into that type of line... ROCK ON!! Sincerely... thanks, STU

We are now on Itunes 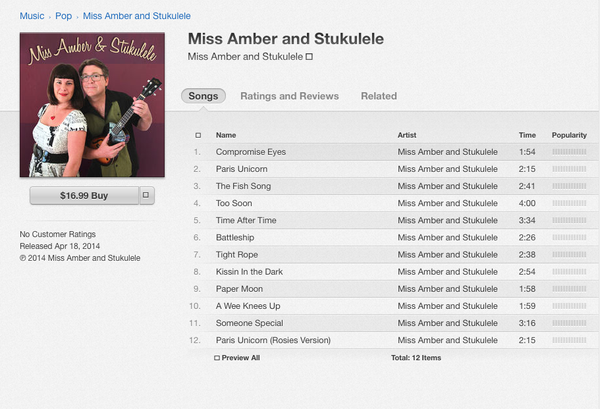 Thanks to the good folk from MGM distribution, we are now on iTunes... hey you could be the first to write a review. Check it out: 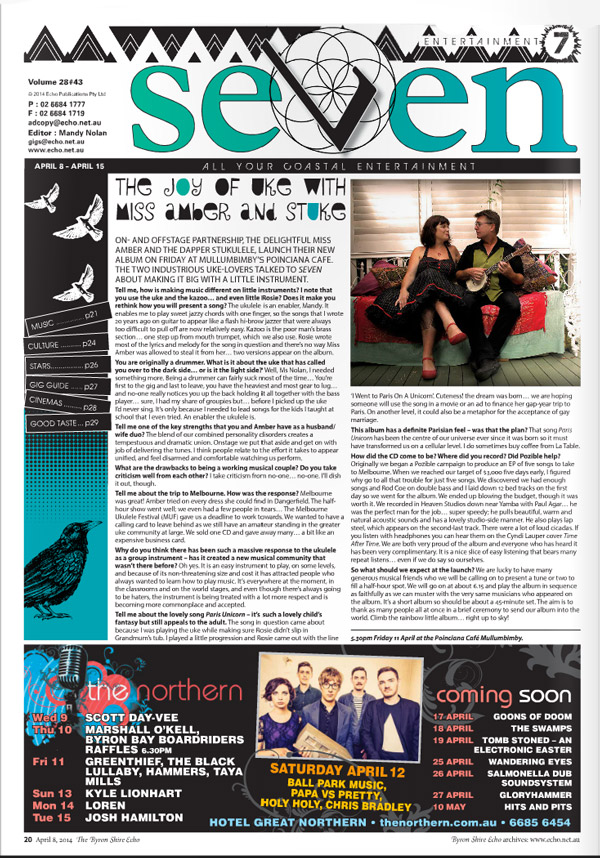 Thanks Mandy Nolan and the echo... we are so very proud to have the front cover of 'Seve'n today, the entertainment guide of our local newspaper. Thanks to Mary Cannon and Sara Tindley for having us on Bay Fm 99.9's Mystery Train with a great musical companion Rod Coe on Double Bass. Nice Singing Miss Amber, just quietly. Click on the image above to download the article. 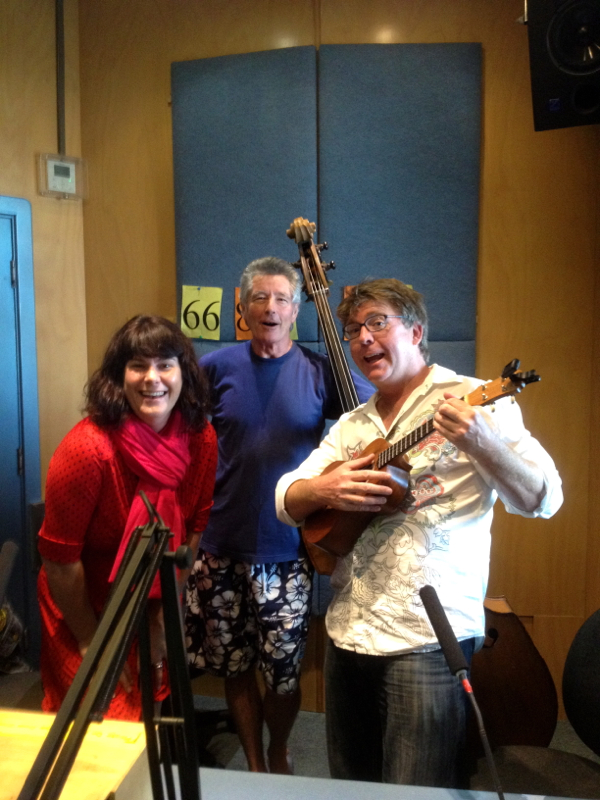