The Story Of Our Debut Album

This project came about because we decided it's time we performed at Australia's longest running Uke Festival... M.U.F - The Melbourne Ukulele Festival. In order to build our confidence as the real deal performers, we thought we would record some of our original songs. So we began a pozible campaign to raise funds to make an EP. As we were a little unsure about how we would go, we were modest with our target of $3000. As it turned out the target was reached with about 5 days to spare.

Rehearsals for the recording went so well, we ended up expanding the EP into an Album...  It appeared we could get everything done as long as we didn't do too many takes on each track. There's a better return financially for an album so it made sense at the time.

We booked Paul Agar's studio, aptly named heaven. Paul is an awesome musician and plays pedal steel. His rates were very competitive and as he was in Ashby (near Yamba.. 2 hours drive for us) it was far enough away to feel the necessary detachment from home life so we could focus on creating.

Every thing was going great... 12 bed tracks recorded on day one with the mighty Rod Coe on double bass who worked tirelessly to get his parts down. Could not have gone any better and after a drive we had a lovely dinner in Alstonville before retiring at our great friends Mark and Sara's studio pad. On day two we were up and out the door before 8am and on the road back to the studio. We recorded the drums and a few overdubs in the morning preparing the tracks for vocals in the afternoon. Then we hit a snag. All the waiting around took a bit of a toll on Miss Amber's state of mind and confidence. 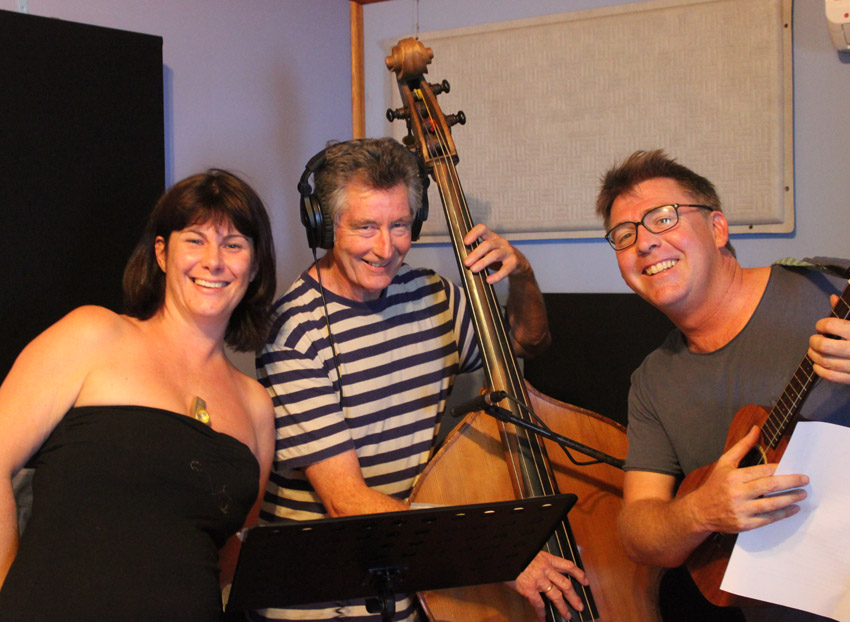 Not having as much experience in the studio, Amber was challenged on the first attempt of her vocals tracks and she didn't quite get the performances she was happy with. We put in some overtime though we weren't relaxed and some of what we put down just didn't cut it. The mood was pretty dark in the car on the way home. When we finally got back we put on the reference mixes preparing for the worst... and of course it wasn't bad at all. In fact we were smiling.

Over the weekend, Stu recorded some accordion, played by Dan Reade, a new musical buddy from England who moved into the area after traveling around Australia. Stu also came up with a horn line for the track 'Too Soon' before driving down in the evening on the Monday, staying over night at the studio in order to get an early start the next morning. Ash, Amber's mum, drove her down the next day with daughter Rose who had a day off school in order to record her take on Paris Unicorn. (It is her song after all.)

In the same way an athlete has to be mentally prepared in order to perform, as does a singer and Miss Amber over came great self doubt to pull out some beautiful vocal performances on day three.... lickety split too. Rosie was a dream. 3 takes and she was done. Stu and Paul put in a long day in order to whip the tracks into shape and mixed 3 of the more sparse tracks which came out even better than expected. Unfortunately, Stu forgot to budget for mastering. Thankfully Paul pulled out all stops and he miraculously managed to mix and master the album in just one extra day.

As we now had an album, the packaging needed to reflect the content... So we decided we had to go with a wallet instead of a single cardboard sleeve and organised a photo shoot with friend Terza at artist Jan Carmody's house in Bangalow. She has an old gypsy caravan as an art studio that took Amber's fancy. There were a few problems on the day, though after a few versions tested on Facebook Stu ended up with some sweet packaging. (At the time of writing this the components are with the manufacturer being pressed, less than 2 weeks since the first day of recording.)

Yes.. we blew the budget a little, though we are so happy to have gone the extra distance and we are very proud of the end result. Chances are, with our position in life with two kids, one at high school, we may not have the opportunity to record again for some time. The main lesson learned was to add some time in the budget for living expenses whilst working the crowd funding campaign as it takes a lot of time and energy. In fact, in hindsight the budget should have been doubled.

It's been a whirlwind to see the project through to this stage... we have had nothing but positive feedback so far. To all our supporters who made it possible, you have our eternal gratitude and love. We hope you like our debut album.